Going viral on WeChat is really difficult. WeChat is designed to be a closed personal environment. If your friends don’t directly share something on the moments news feed or in a group then it’s going to be pretty difficult to find. Below I bring you 5 classic case studies of stuff that somehow managed to go viral together with some analysis on why.

Were you a WeChat user back in September 2015? If so you might remember a day when everyone started posting this on their moments news feed.

The concept was simple and spread like wildfire particularly amongst English speaking WeChat users. The origins of this campaign are unclear, it seems to have started on Facebook and spread across several social media platforms, including WeChat. 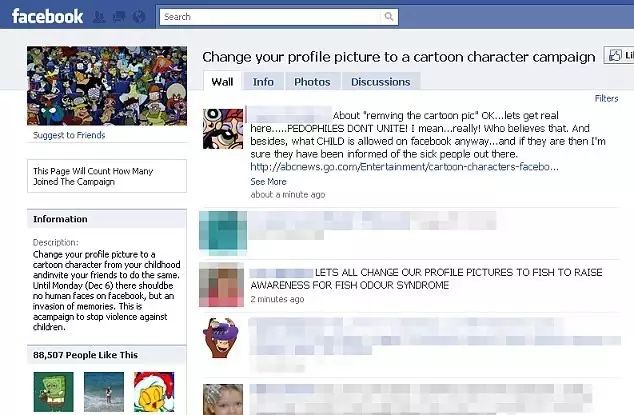 Analysis:  The concept of changing your profile picture for a day to a comic book or cartoon character clearly resonates with many people. Harmless fun for a good cause. What’s most interesting about this campaign however was the lack of a link or push to more information on the charity. How was anyone meant to donate or even find out more information? This leads me to doubt it was actually an official campaign from a charity.

2. Luo Yixiao, Stay Where You Are!

More questionable charity. In November 2016 an article pleading for donations to help a young 5-year-old Chinese girl diagnosed with leukemia went viral on WeChat. The article literally broke the WeChat tipping feature which was used to accept donations, maxing out the daily limit of 50,000 RMB (approx $7,400) which previously had never been reached. 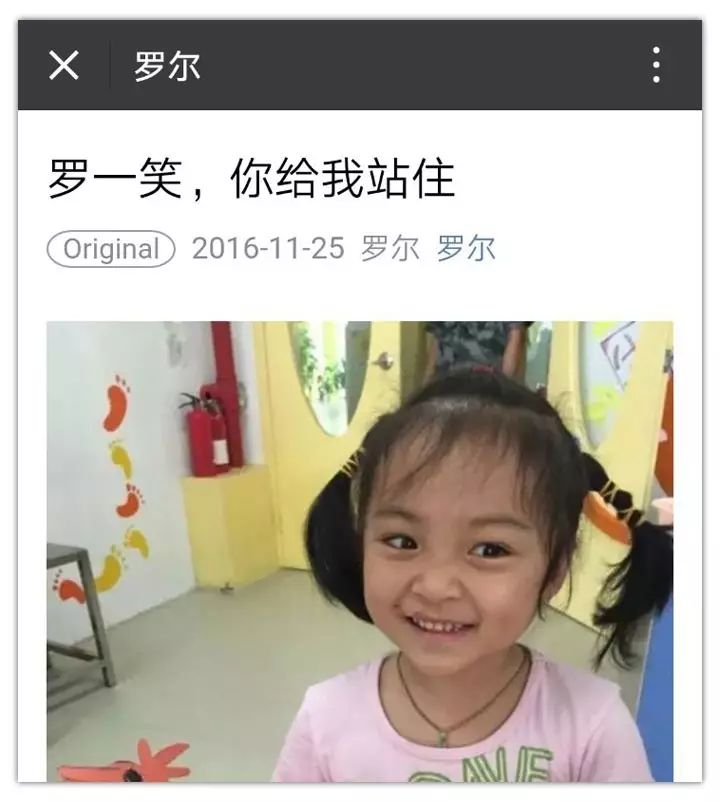 The WeChat tip feature breaking didn’t stop people sending donations directly to the child’s father. He collected 2.7 million RMB over the next few days. Controversy ensued when it turned out that the father already owned 3 apartments and 2 cars, plus most of the girl’s medical bills were already covered by insurance. Huge debate online was sparked regarding immoral charity marketing. All the donations through WeChat were eventually refunded. 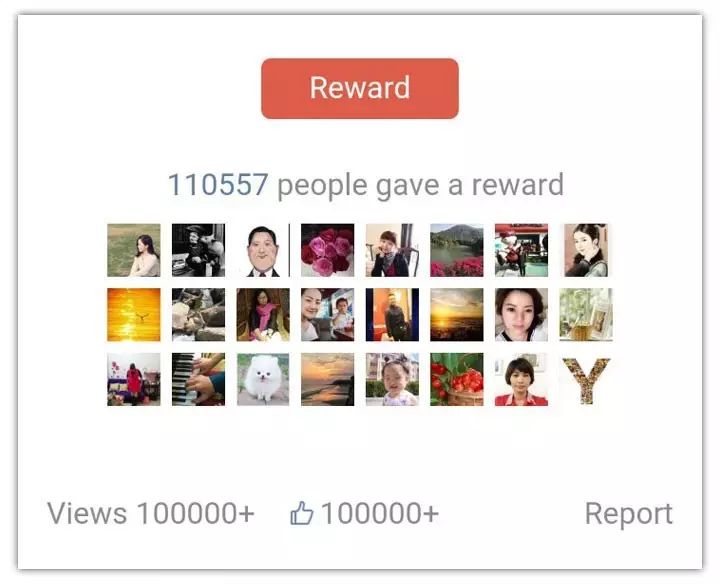 Above: the article also maxed out the WeChat views and likes counters at 100k. Check out the article for yourself HERE.

The article was very well written and quite moving. It’s no coincidence that the father of Luo Yixiao was an experienced media and marketing writer.

This story set in 1930’s Shanghai of a femme fatale on a secret mission to find and assassinate her target went viral on WeChat in May this year. The story was told as one incredibly beautiful and very long image.

Analysis:  Telling such a tale through a single continuous image was refreshingly original. The mystery story was genuinely very entertaining and suspenseful. Too many adverts simply want to shove the product into your face from the start. Here they didn’t reveal who was behind it (a Chinese skin care brand) until the end by which time readers were already captivated and actually wanting to know who made this story. 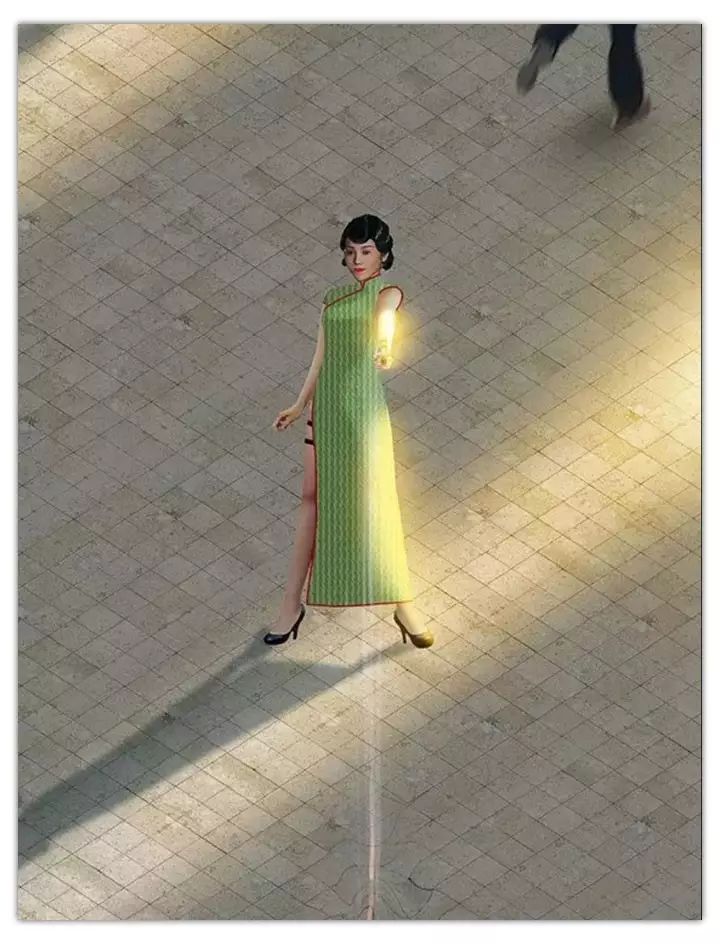 4. Chatting with the Premier

“Two Congresses” (两会) is the most important annual political event in China held each March. Around the time of this year’s event a webpage went viral on WeChat mimicking the Chinese Premier Li Keqiang inviting the viewer to a WeChat group chat together with other top national officials. 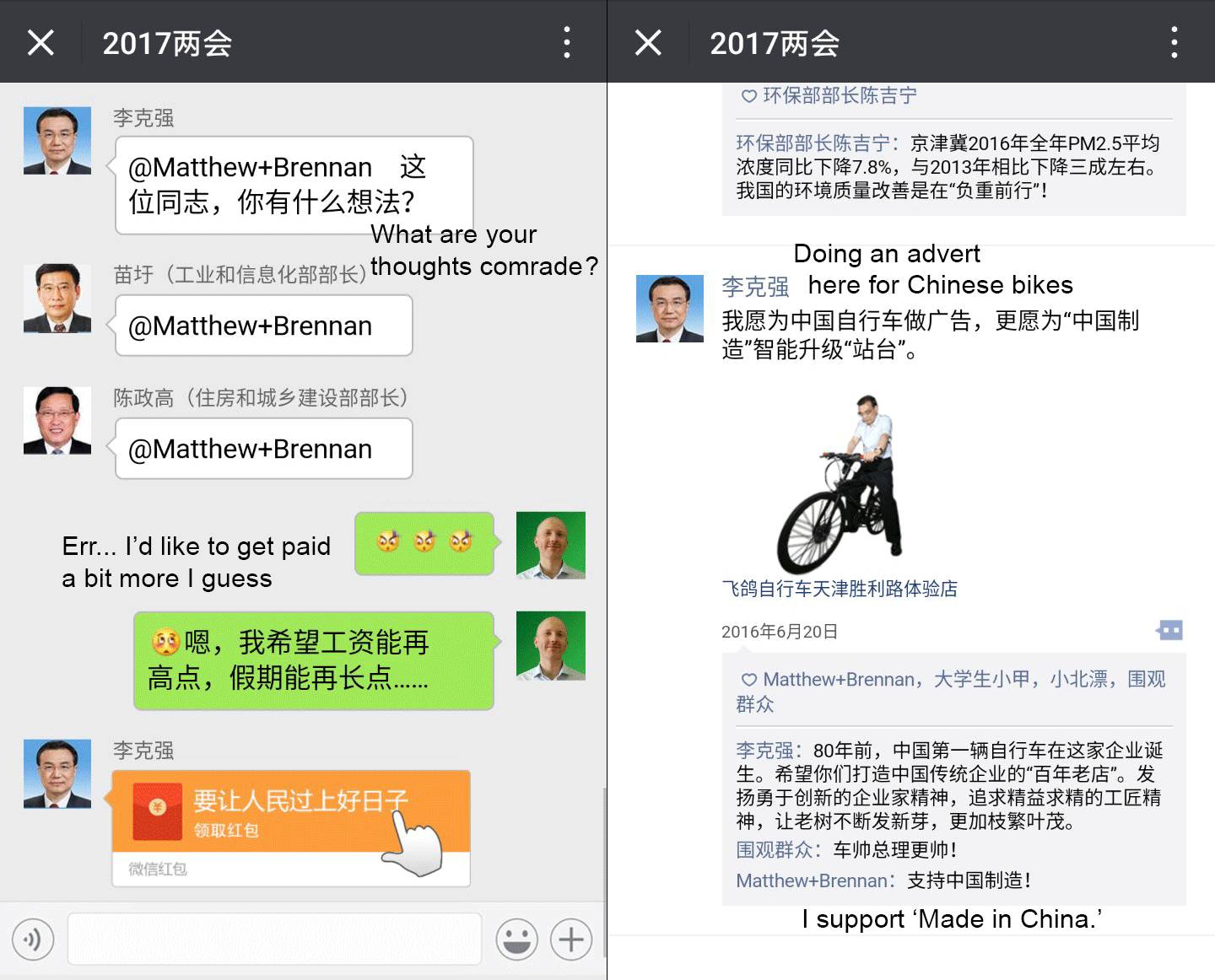 Analysis: Every March the “Two Congresses” is a hot topic and receives heavy media coverage in China. Playing around with this theme and adding a sense of humor to the dry political on goings was quite unique. Who doesn’t want the honor of receiving lucky money from the Premier of China? (Don’t answer that 😉 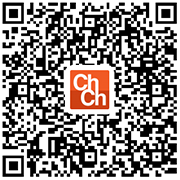 Check out the webpage by scanning the QR code above with WeChat.

In January 2016 a webpage entitled ‘The Story of Me & WeChat’ went viral across moments. (ChCh article here). Later rumors started to appear across WeChat that the webpage was in fact a virus which when opened would steal all the money from your phone’s Alipay account. Things got so bad that WeChat had to release a statement stating that the rumors were false.

The webpage showed a variety of data about the reader’s activity on WeChat.

Analysis: Seeing for the first time personalized data regarding their online social habits was understandably super interesting to many people. Hence why the webpage went viral (it’s since been taken down). It’s also a quite scary as it reminds us of how much information WeChat team has access to. There was even a time when WeChat reminded us all that they know when we sleep (read article here).

Matthew was recently recognized by LinkedIn with a ‘2018 Power Profile Award’ given to the most influential profiles on the platform. He is also co-host of the China Tech Talk podcast produced together with China’s largest English language tech media, Technode & TechCrunch China. His company organizes China’s largest WeChat marketing conference series for international companies. Matthew’s team work with a select number of multinational businesses to help form and implement their WeChat and China digital marketing strategy. Matthew has been based in China for 15 years.

This book charts the incredible story of WeChat. From humble beginnings into a mobile platform unlike anything the world had ever seen. Today modern Chinese life would simply be unthinkable without WeChat.

We look at what went on behind the scenes in its struggle to the top and the famously bitter rivalry between Jack Ma’s Alibaba and WeChat’s parent company Tencent. We chart the journey of WeChat’s enigmatic and mysterious founder Allen Zhang, “the father of WeChat” and China’s most revered mobile internet innovator.

We look deep into the fintech disruption brought about by WeChat Pay, ushering in China’s mobile payments revolution.

The book is the result of over one year’s painstaking research and including insights from several exclusive first-hand interviews with industry insiders. This is the first ever English language book to explain exactly how WeChat works and what makes the ecosystem tick. Inside we systematically chart the progress of WeChat, breaking down each stage with analysis of the real driving factors behind the incredible success story.

We also bring what’s happened in China with WeChat back out into a global context, drawing comparison and reference to Apple, Facebook, WhatsApp, LINE, and Snapchat amongst others.

This is essential reading for those wishing to understand the disruption and innovation brought about by China’s technology giants or for those wanting insight into China’s modern mobile lifestyle.