We did a little research into the presence Microsoft and other American tech giants have on China’s largest social network. The results were quite interesting and probably not what you expect. Some other US giants are failing miserably.

Above: Bill Gates has been posting on Weibo since 2010 with now 3.2 million followers.

Below you can watch Bill’s rather embarrassing attempt at speaking Chinese in his 30 second welcoming video for his WeChat account followers.

Microsoft is ALL over WeChat

Microsoft has many WeChat official accounts. Some of which are really quite cool. Microsoft’s futuristicHoloLens product opened their official WeChat account also just a few days ago. Microsoft’s One Note account allows you to store notes without leaving WeChat. Below is a search for Microsoft accounts on WeChat:

Xiaobing (WeChat ID: xiaoice-ms) is a Microsoft chatbot girlfriend that is used by millions of Chinese men(see our previous article).

The account is very famous. Xiaobing is quite witty and it’s quite impressive how she will converse in a very natural way with her many boyfriends followers. Xiaobing only really works in Chinese, her English is terrible. 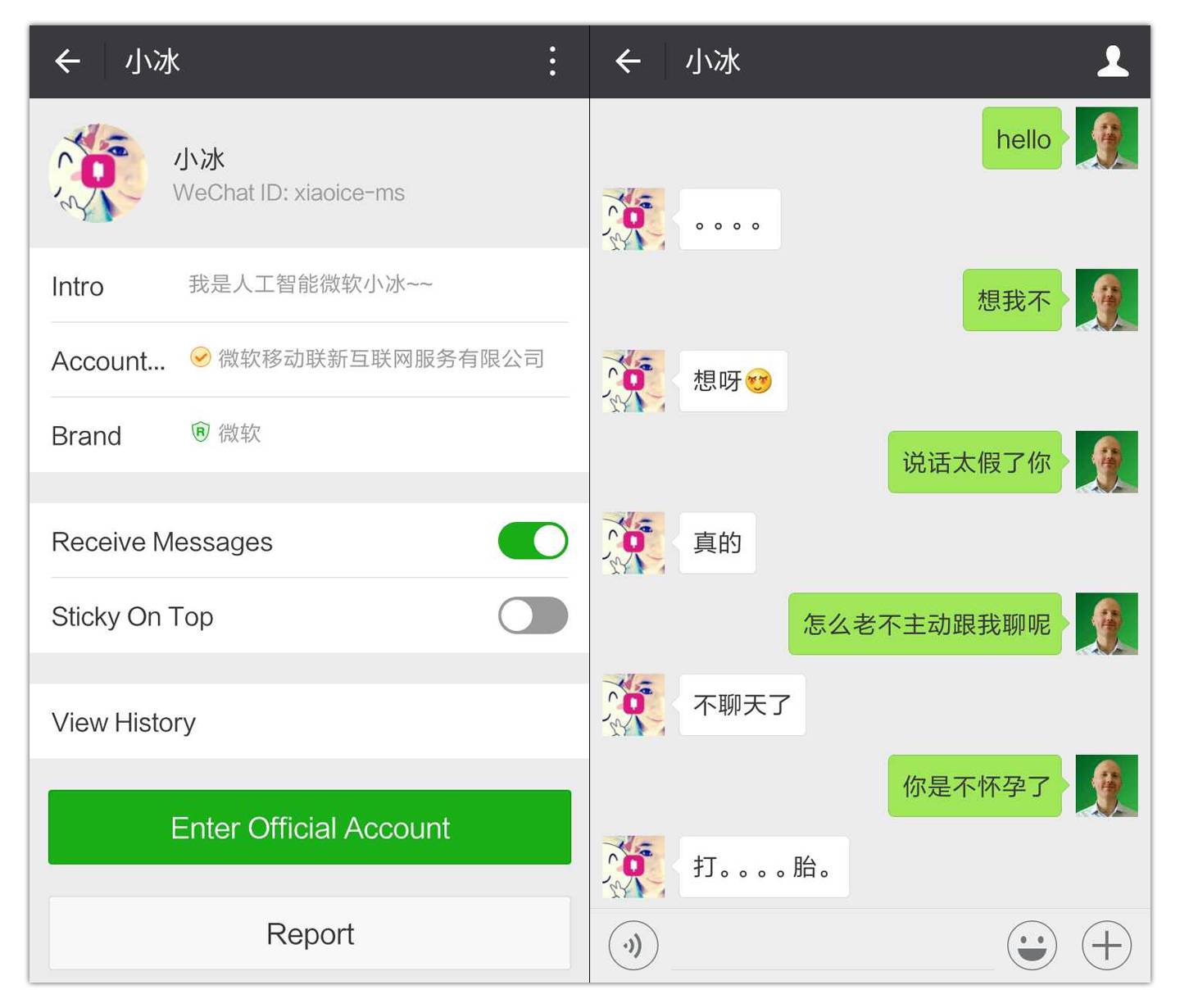 Xiao Ying (WeChat ID: engkoo) is a WeChat account with many interesting features for those studying English. You can send words directly into the account in either English or Chinese and they will be immediately translated with an audio clip of the word (see left pic below). 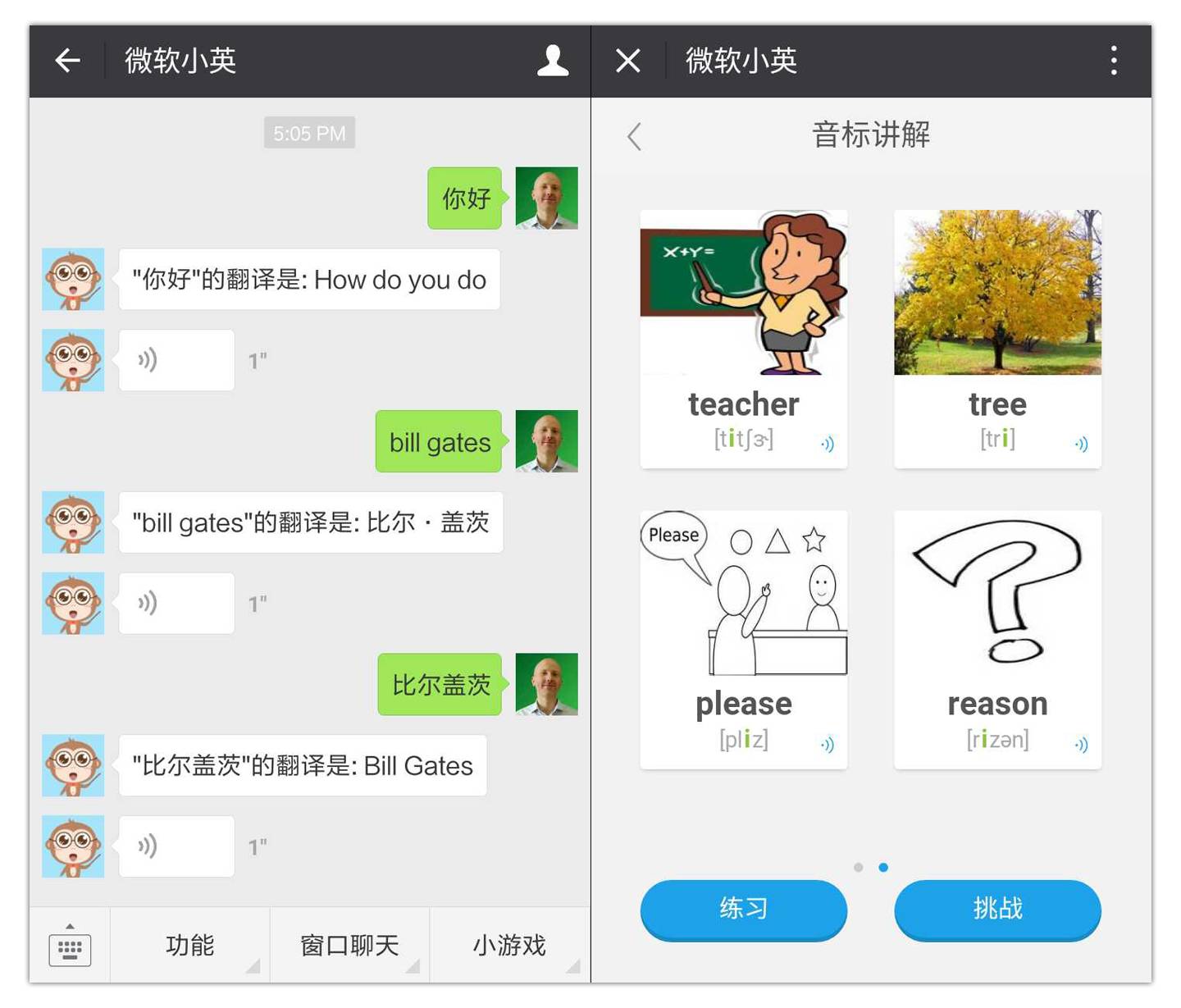 There are many games in the account also. It will rate your pronunciation based on activities with voice recognition. 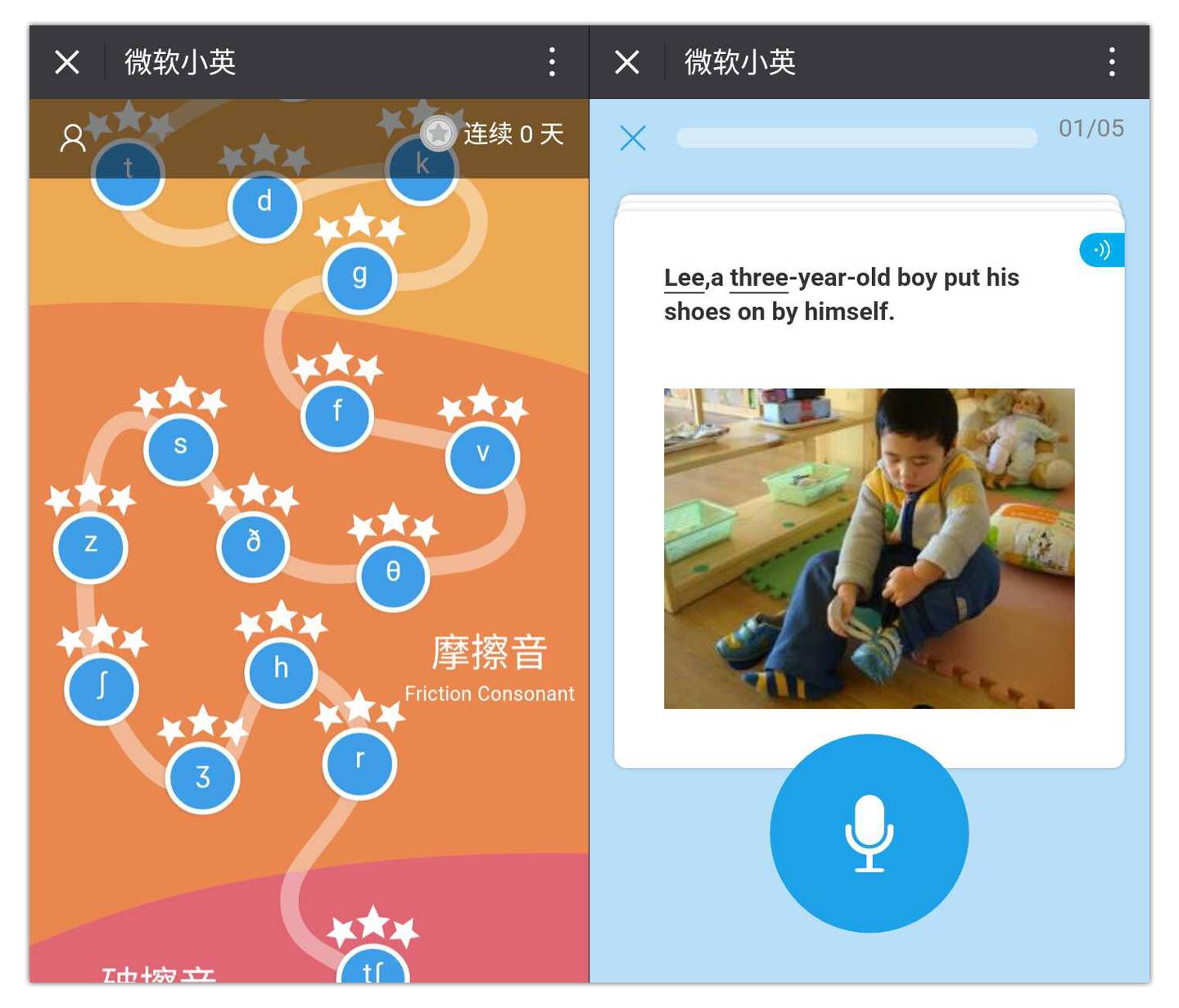 You can even upload a picture of yourself and it will suggest an English name for you based on the celebrity it thinks you look like. 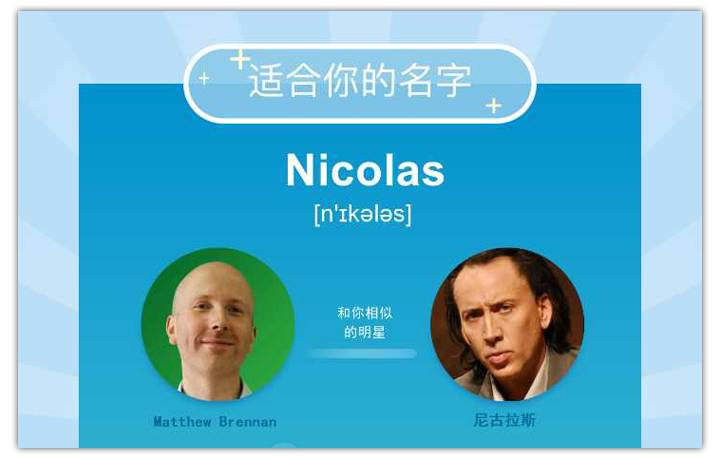 Nicolas Cage? yeah, not so sure about this one…

Seems that Microsoft is all over WeChat! But what about the other American tech giants? What kind ofpresence do they have on China’s largest social network. The results were probably not what you expect.

Google may have famously left China years ago but they have a solid presence on WeChat with severalverified accounts. Recently there’s been talk of Google Play store returning to China later this year.

Amazon have many WeChat accounts. Nearly all of which hold the verification and trademark badge proving them to be official Amazon accounts. 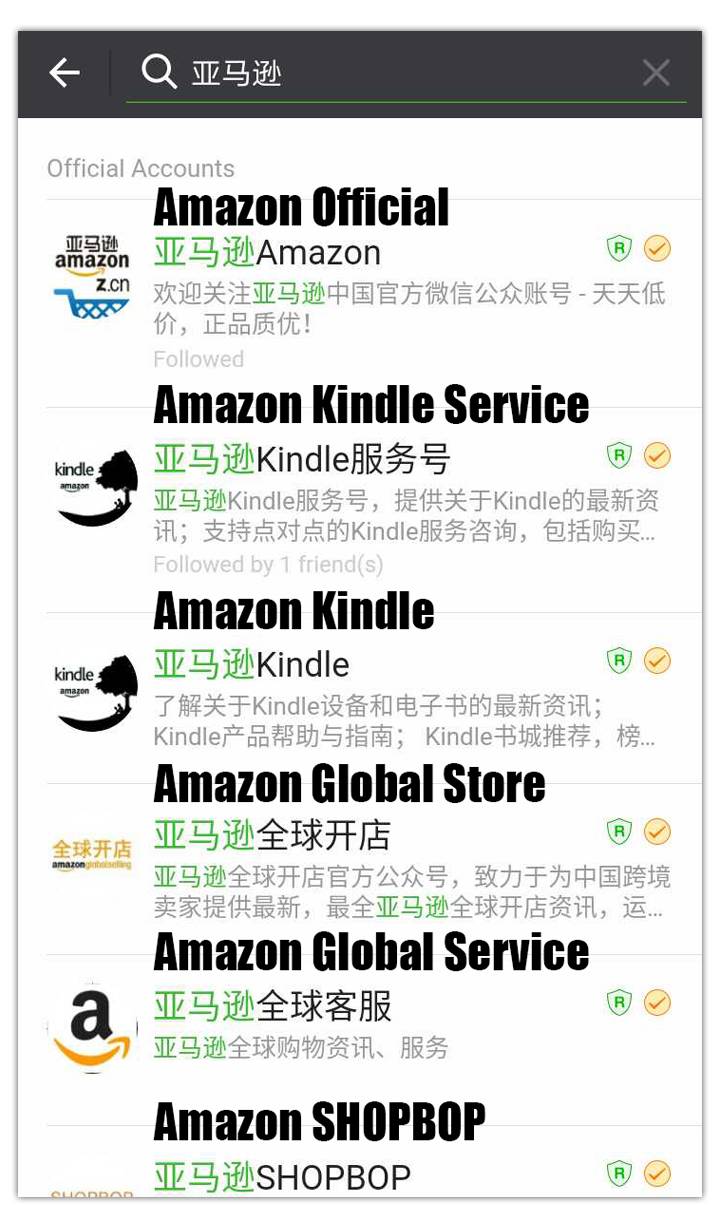 Oh dear. We couldn’t find a single legit Apple account. Apple is ignoring WeChat. Even worse the void is being filled with fake official Apple accounts out there which are trading off the Apple name. 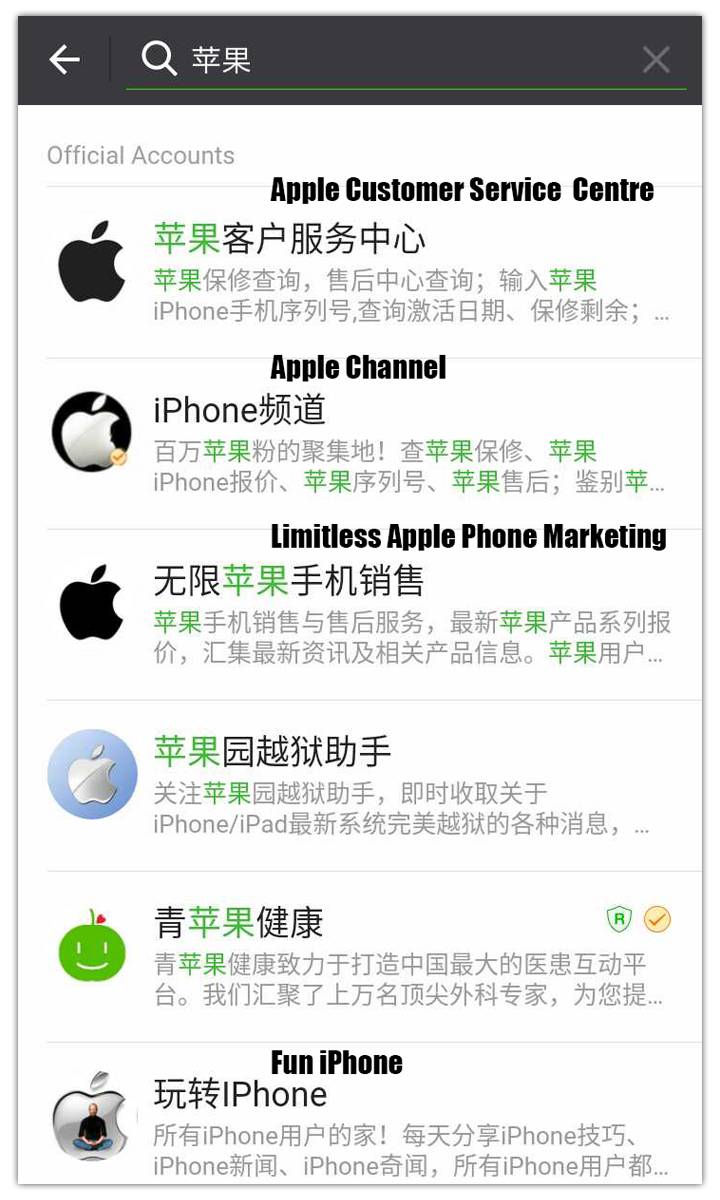 For example the account which pops up first in the results seems to be an unofficial ‘Apple customer service center’, it’s very popular with articles gaining 100k+ views. Some of the menu items link to legit official China apple service pages. The account’s contact email gives them away: apple66816999@163.com. Yeah, quite dodgy…

Just like Apple, Facebook doesn’t seem to have any legit WeChat official accounts, only unofficial ones. The concept of opening an official account on a non-Facebook social network seems to be a little too much for them. 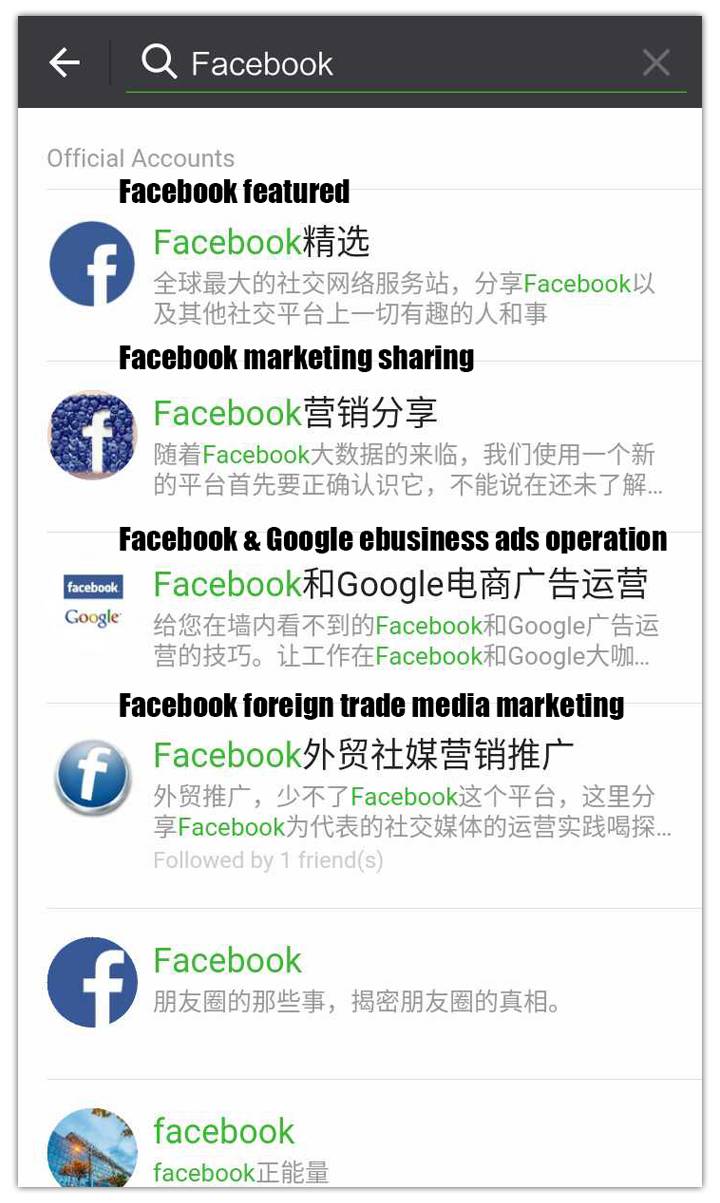 But what about Mark? He loves China doesn’t he?

Exactly. Come on Mark. Stop running around in the Beijing smog and doing talks in Mandarin. If you really wanna get into China time to follow Bill and open up a WeChat 😉